With nearly every BIG EAST women’s basketball team now at the 10-game mark of the 2022-23 season, where is each school heading into the thick conference schedule quickly on the horizon?

Long answer: There are still plenty of unanswered questions about the BIG EAST, including whether upsets can stick with their early-year successes throughout the campaign; if the elite can get it together in time to set up worthy matches; or if the league is as strong from top to bottom as it has been in a long time.

Non-conference tryouts and tuneups are winding down — there’s a big one in particular coming up this week, by the way — but the BIG EAST conference season is raging right next to it, and will likely reveal answers to the above questions very, very soon.

Here’s a look at BIG EAST women’s basketball games you can check out this week on FloHoops, which will be streaming league games all season long:

NOTE: All tip times are listed in Eastern Time and are subject to change.

Want to see if Creighton is as legit as advertised after an impressive 8-1 start? So maybe see how the Bluejays fare in Omaha against the red-hot Razorbacks in the only matchup between two Associated Press Top 25-ranked teams on Saturday’s schedule.

After its historic run to the NCAA Tournament Elite Eight a season ago, Creighton’s good vibes haven’t waned much from its epic surge in March.

The Bluejays run one of the nation’s most efficient offenses with impressive wins over Villanova, South Dakota State and the always hot in-state rivalry game against Nebraska. No. 16th-ranked Creighton wiped the floor with the Cornhuskers in a 77-51 blowout back on Nov. 15.

Guards Lauren Jensen (17.2 ppg) and Morgan Maly (17.0) make up one of the best backcourt duos in the entire BIG EAST, and with four starters knocking down at least a third of their 3-pointers so far in year — Guard Molly Mogensen is shooting 53.8 percent from deep, actually — Creighton is a dangerous unit that makes few mistakes and is hard to slow down. But is it enough to take down No. 21 Arkansas, which is currently off to its best start to the season since 2013-14?

Head coach Mike Neighbors is likely taking the Hogs to their third straight trip to March Madness for the first time since 2001-03, and this year’s team could be the best of the bunch — even including the 2020-21 unit that featured WNBAers Destiny Slocum and Chelsea Dungee .

Sophomore guard and reigning Southeastern Conference Freshman of the Year Samara Spencer (15.8 points, 4.4 assists per game) is the team’s heartbeat, with redshirt senior forward Erryn Barnum (14.9 points, 7.1 rebounds, 1.1 blocks ) in the midst of a breakout campaign as one. of the SEC’s best interior presences, able to provide a change of pace and prevent teams from focusing solely on Spencer.

One of the best in the country 🎯 pic.twitter.com/xne9noIB8h

Four-year starter Makayla Daniels (13.3 points, 40 percent 3-point shooting) could be back in time to return to the lineup after missing three games with a foot injury as well, adding to the weapons that Creighton must contain if they want to have a chance to win the best win of the year so far.

Either way, expect a good one in Omaha this weekend.

Things are still going well for Butler, even with a 5-5 overall record that looks lousy at first glance.

Taking a much-improved Illinois team to the limit in a two-point loss wasn’t a bad way to close out a homestand before what will be a crucial four-game road trip for the Bulldogs at the start of the season.

Those road games begin at Marquette this weekend, with Butler — who hired former IUPUI coach Austin Parkinson in the offseason — looking to get back into BIG EAST play after losses to a white-hot St. John’s and a strong DePaul team to start their conference campaign, plus winning their first league game in almost two full years after just four wins combined over the last two seasons.

It’s also a big test for a much-improved Butler offense that shoots the ball at an impressive rate (39 percent 3-point percentage, 16th in the country at the time of writing) and overall looks like a completely unrecognizable unit from the one that was routinely trampled. in a horrible 1-26 season a year ago.

The Golden Eagles, meanwhile, are a strong 8-2 to start the year (an overtime loss on a neutral court to UCLA and a loss at Seton Hall are the only blemishes so far) and have prided themselves on defense within the philosophy of coach Megan Duffy, now in in his fourth season with the program. 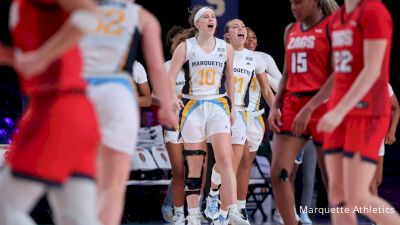 Now 6-0 when allowing 60 points or less after taking care of Loyola Chicago with a 77-53 scoreline over the weekend, it may actually be the production of Marquette’s offense against an improved but still error-prone Butler defense that will be the most important factor in determining Sunday’s outcome in Milwaukee.

Fortunately for the Golden Eagles, so far, things look so good in that regard, too: Jordan King, Chloe Marotta and Liza Karlen are all averaging double figures in the lineup, and their 1.21 assist to turnover ratio means the Bulldogs likely won’t have many chances given to them either.

Surely DePaul sophomore forward Aneesah Morrow was headed for a regression after posting one of the best freshman seasons in women’s basketball history, right?

Everything the native Chicagoan has done at the age of just 19 has arguably looked even better. Arguably the best two-way player in America, Morrow is averaging 26.1 points, 12.1 rebounds, 3.0 steals and 1.1 blocks a night for the Blue Demons. Coach Doug Bruno’s high-octane, breakneck offense is a match made in heaven for Morrow, who played high school ball at legendary Chicago hoops institution Simeon — alma mater of Derrick Rose, Jabari Parker and Kendrick Nunn, among other NBA greats.

1,000 career points in 43 games – only 12 women in NCAA Division I history have done it faster‼️ pic.twitter.com/mKzCAsX09B

But even with Morrow and a terrific sidekick in junior guard Darrione Rogers (19.5 points, 6.0 assists per game), that hasn’t necessarily resulted in success for DePaul so far this year. The Blue Demons’ three losses on the season have come to Northern Illinois, Cleveland State and Towson, a trio of perhaps underwhelming results that have dampened the feeling of the big wins a bit — especially a 76-67 victory over No. 15 Maryland in November.

The early season tendency to underperform may be where Georgetown comes in to strike. Like Butler in that they’ve seen some down times in recent seasons, the Hoyas look rejuvenated with a 6-3 record to start the season under sixth-year coach James Howard, who was very much on the hot seat entering the year after three consecutive single-digit win seasons in the nation’s capital.

But a stout defense (57.7 points allowed per game) this time around is helping GU establish some momentum, entering the DePaul showdown on a three-game winning streak following wins over Xavier, Fairleigh Dickinson and Navy.

Also, when in doubt, the Hoyas can always turn to the hack-a-Demon strategy: DePaul’s current 60.8 percent free throw percentage ranks among the worst in America, with Morrow (a player widely tainted based on her usage ) which shoots below. marking from the charity stripe at 58.2 percent for the season.