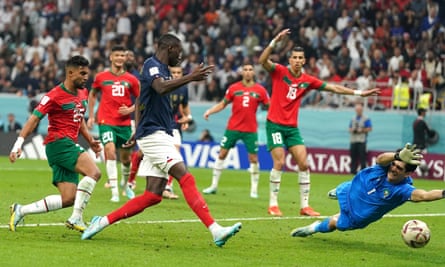 In the end, it was a triumph for France’s savoir-faire, their ability to handle this kind of occasion, to get the job done – even when they were below their best. Theo Hernandez scored early on and Didier Deschamps could reflect on a good defensive performance, especially from Ibrahima Konaté, who would give his side their first clean sheet of this World Cup.

When Kylian Mbappé burst into life inside the area late on, showing his tinkling toes and seeing a low shot deflected off, it was substitute Kolo Muani to tap home. Antoine Griezmann was once again excellent in midfield, a case study in calm amid the tumult, simple balance and technique, his understanding of everything around him a joy, and France remain on course to defend their title. The final against Argentina on Sunday promises to be a classic.

And yet the broad brushstrokes didn’t capture how Morocco made France sweat, how they played with their chests out and not a hint of an inferiority complex. The African team – the first from the continent to reach a World Cup semi-final – had long since put it behind them on their epic run past Belgium in the group stage, Spain and Portugal in the knock-out rounds.

Walid Regragui’s Atlas Lions made fun of snotty European claims that they were overly defensive by going forward, breaking lines and creating chances. It was an opportunity to excite the fans who had turned this stadium into a sea of ​​red and the many millions at home. When Regragui’s players crumpled on the grass when it was over, they did so after leaving everything out there.

The 200-1 shots at the start of the tournament had only won two previous ties at this level. They had created miracles; Leicester City on an adrenaline overload or, as Regragui put it, Rocky Balboa. This would be a step too far, although, as France celebrated, there was a lump in the throat – a prolonged and moving round of applause for Morocco from all sides of the arena.

It was a night when the mood was pulsating, the sense of history and, yes, opportunity impossible to ignore. It was a further return on the passion for and massive investment in the Moroccan game by King Mohammed VI and the national federation. All who traveled were determined to live it to the fullest.

What Morocco did not take into account was the concession of the early goal.

Regragui had put in a back five for the first time and it was broken when Raphaël Varane played a sweet pass up the inside to Griezmann’s right, which Jawad El Yamiq tried to intercept. He failed.

Griezmann crossed low and Mbappé had two attempts blocked. After the second, the ball sat up at the far post for Hernandez and his side-on finish was a beauty. It was only the second goal Morocco had conceded here – after the freak own goal against Canada – and the first time they had gone behind.

Regragui had lost Nayaf Aguerd before kick-off, having named him in the starting XI, and another midfielder, Roman Saïss, who had been a doubt for selection, did not last until the 21st minute. He limped off momentarily after misjudging a high ball and letting in Olivier Giroud.

Giroud whizzed against the outside of the post. Noussair Mazraoui, who also had an injury, would not reappear in the second half.

It was possible to wonder if the physical strain had caught up with Morocco, and yet they threw even more energy into the match. Regragui rearranged to 4-1-4-1 without Saïss, but in both systems Morocco held a high line and pressed forward. France were happy to sit in, chase turnovers and go over quickly.

Morocco carried the physical battle, they got 61% of the possession and announced the equaliser. Especially when El Yamiq put in an overhead kick in first-half stoppage time after Giroud had half-secured a corner, sending the ball down the left. Hugo Lloris came over to tip it onto the post. Earlier, the goalkeeper had sprung the other way to push away an Azzedine Ounahi curler as Morocco wanted a penalty when Hernandez clashed the shins of Sofiane Boufal.

France should have been ahead 2-0 after 36 minutes. Aurélien Tchouameni found Mbappe who failed to finish, El Yamiq cleared but only as far as Tchouameni, who sent a quick pass back to Giroud, who was unmarked on the penalty spot. He sent a first-time shot wide of the post – a bad miss.

Morocco wanted no adventure, especially Achraf Hakimi, who was in marauding form up the right, linking up to good effect with Hakim Ziyech.

Sofyan Amrabat excelled in front of the defence.

Morocco continued to force matters at a startling pace after the break, some of their exchanges in the final third easy on the eye. Substitute Yahia Attiyat Allah could not connect with a shooting chance when he was well placed. He also ghosted in behind Jules Koundé, his cross hacked clear by Konaté, while almost picking out his substitute, Zakaria Aboukhlal.

French substitute Marcus Thuram missed a clear header and then came the opener as Morocco felt their hearts quicken, another substitute, Abderrazak Hamdallah, waltzing through after Tchouameni had been taken off.

Hamdallah couldn’t work the spot he wanted and it slipped away.

Over to Mbappé to kill the dream. It was Kolo Muani who made the move after a loose Morocco pass, but it was Mbappé who ignited it, his quick feet blurring, the shot falling off substitute Abdessamad Ezzalzouli to break friendly.

When Hamdallah had a last-gasp effort cleared off the line by Koundé, Morocco were denied the consolation they deserved.