As Google says, “The cybersecurity landscape has changed.” Now, to understand how the current generation of hackers and cyber security threats work, you need to step into their shoes. This is exactly what the cybersecurity team at Google is doing to keep users and their data safe. To show how this elite security outfit protects us, Google created a six-part documentary series featuring never-before-told stories that take a behind-the-scenes look at Google’s hacking team and how they work to keep everyone safe.

However, hacking and cybersecurity is a fairly complex topic, and showing millions of lines of code simply wouldn’t be very visually appealing or engaging to the average person. This is where LA-based design studio and creative agency Imaginary Forces stepped in. Using its expert team of artists, designers and animators, Imaginary Forces (IF) decoded the hackers’ world into a metaphorical world – with vivid and accessible images to accompany the documentary’s speakers.

IF used a unique system of 2D glyphs and 3D voxels that became the building blocks of an easy-to-understand visual language. From visual montages to battleship metaphors, the designers worked with Google to drive the brand’s message about the virtual heroes fighting for the most vulnerable users on the web. To discuss how this was brought to life, LBB’s Ben Conway caught up with IF’s creative director on the project, Tosh Kodama.

LBB> Have you worked with Google Creative Lab before? How is your relationship? And how did this project come about?

Tosh> We’ve worked with them before, but it was a different team and a lifetime ago. This team takes the “Creative Lab” part to heart. They are thoughtful designers, who challenge you creatively, and they are masters of their craft. This was a perfect union and collaboration.

This project started as a two week design sprint. We worked directly with JR [Schmidt, motion designer at Google Creative Lab] and his team. They gave us a small design challenge and we came up with a system that solved a small part of the bigger picture. One thing led to another, and we spent a good part of the year on this project.

LBB> You’ve said it was a “collaborative design process”. How did you work with Google on the technical/design processes as well as the messaging/creative process?

Tosh> JR, Donica and Derrick Lee were great partners. They are good storytellers, but they also know the craft. They were hands-on, literally on the box, trying different things. There is a lot of respect when anyone can jump in anywhere and turn an idea into reality.

LBB> What were some of the most important design elements in your visual language? Tell us through how you built the language!

Tosh> Voxels are the building blocks of our story. The graphical component exists to support the larger story, and the voxels visually represent a complex system of code and networks with billions of connections. The voxels can visually show an endless sea of ​​complicated networks, but also drill down to a single voxel being compromised. They gave us the flexibility to express many complex ideas with great impact.

The transition from 2D to 3D developed over time. That’s what’s great about working with a team that understands that it takes time to develop a narrative system that’s complex, yet simple and unexpected. I give a lot of credit to the collaborative nature of this project.

LBB> The top-down view of the voxel towers and castle-like structures almost has a video game feel – was that intentional?

Tosh> Yes, it was deliberate; all the graphics are in support of the larger story. There was a part in the ‘Red Team’ episode where they used a video game metaphor. The graphic system that was created was flexible in telling several types of stories. This was one where it made perfect sense – voxels and video games. Maybe it’s obvious, but how can we avoid it? It’s so much fun to make that connection, and it’s effective storytelling. 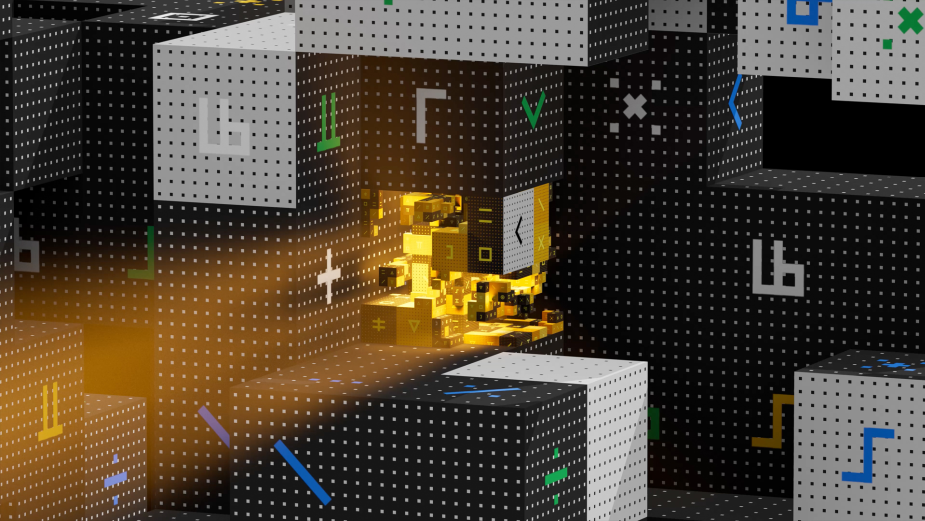 LBB> What were some key inspirations for the visual style/design of the teaser video? Were any video games, movies or other art an influence?

Tosh> Yes, the inspiration was from James Cameron’s underwater exploration. We watched the way the darkness swallows any kind of light on the deep seabed. How things come to light but quickly disappear. You only see what is in front of you, but you know that the vastness of the ocean exists far beyond what you can see. It’s mysterious and treacherous, it makes you curious and in awe of how much we don’t know or see. That is the emotional task we were challenged to express in short.

LBB> What was your favorite animation/VFX shot to create and how did you achieve it?

Tosh> A block of voxels getting compromised or infected is one of my favorite test animations. Brandon Savoy, our lead animator and art director, was obsessed with how the voxels behaved. What is the rate of decay? How does it divide? How does it react to gravity? This voxel world is a very rigid and lattice structure. The animation, on the other hand, is organic, and the movement is unexpected. The combination of these elements gives life to the world. The voxel world alone without the animation wouldn’t be as compelling to watch, and we want the viewer to feel uneasy about the way things are unfolding.

LBB> What was the most difficult challenge you faced on this project – and how did you overcome it?

Tosh> Everything is hard. It’s so easy to create beautiful work these days with all the tools at your disposal. The hard part is creating something that cuts through while staying true to the nature of the project. Capturing the right mood and being able to manipulate it, to create unexpected moments, to create impactful moments. It’s all difficult, but when it comes together into a beautiful symphony, it’s worth it. It’s never going to be easy, but that’s the part I love, the challenge of bringing it all together.