NEW BEDFORD — “One of the biggest reactions I get when I go on stage and talk to young people is when I say to them, you know you can be a food scientist? People are just like that, what do you mean?” said Angel Diaz, co-founder of the New Bedford-based youth organization STEAM the Streets, about his presentations to local students about the vast career opportunities in science, technology, engineering, art and math that make up the STEAM acronym.

“Then I’m like yeah, and there are eight different types of food scientists. And they’re like what?! No possible. Yeah, dude! And if it’s interesting to you, do it!”

By forming their education-based youth organization in 2016, Diaz and co-founder, professional videographer Ben Gilbarg — both from New Bedford — found a way to give back to their city, exposing local students to lesser-known, high-paying careers. weighing and trying to raise their awareness of the limitless possibilities of their future. Despite that, their vision, and the needs their group seeks to meet, is bigger than the whaling town. That’s why the two say STEAM the Streets is in the midst of a special moment with the recent launch of their mobile app, which almost infinitely expands the reach of their message — one they’ve spread primarily through local programming and partnerships with city schools with their brand of hip-hop-infused, youth-targeted outreach.

Gilbarg said the idea for the app, which debuted in October, began to take shape back in 2017 before the COVID pandemic provided the opportunity to begin making the idea a reality.

“I personally have been a video producer and content creator going back to my time at New Bedford High, so naturally that became part of what we did with STEAM the Streets,” Gilbarg said, noting that the group’s video productions came to include career profiles that highlight various STEAM-based pathways. “We noticed that it definitely worked, the students would be hooked to the screen, so we wanted a way to bring our content and approach to scale because we realized that it’s great to reach a few schools, but this is a national problem we trying to address where there aren’t enough people to fill all these jobs that are out there.”

The app: How it works

The STEAM the Streets app, currently available for free download on the Apple iOS (iPhone) and Android platforms, features slickly produced video segments – or “episodes” – of professionals from diverse backgrounds talking about their jobs and the paths to take . get there; as well as a news feed with articles and other resources.

But it is much more than a guided video player and media scroller. Upon first login, new users are presented with a series of unrelated images shown two at a time, and in each case they are asked to select the image that appeals to them. “And if you don’t quite know what each one is, that’s okay—it’s all about which image resonates with you,” Diaz explains in a video review of the app.

Come in the spirit of giving:The Neediest Families Fund is starting its holiday fundraiser for New Bedford families

Users’ choices then help the app find three potential career paths to explore, each with two-part video lessons. The first part consists of an interview with a professional in the field, after which users are asked about what they learned, give them points in the app and unlock the second video where Diaz talks and raps about things like the effects roles have and details like earning potential, as well as the steps to enter that field. Users can see how their progress stacks up against others in the app via a leaderboard, and at the end of a “season,” top scorers will be entered to win prizes, Diaz explains in the introductory video.

“After the two videos are finished, you’ll see a roadmap of important milestones to complete if you enter that field,” Diaz explains, “and after you’ve completed all the questions, Step 3 will be unlocked. These are curated entries level resources so you can try out an activity and act on your inspiration. And when you complete each STEAM challenge, you’ll unlock a new one.” 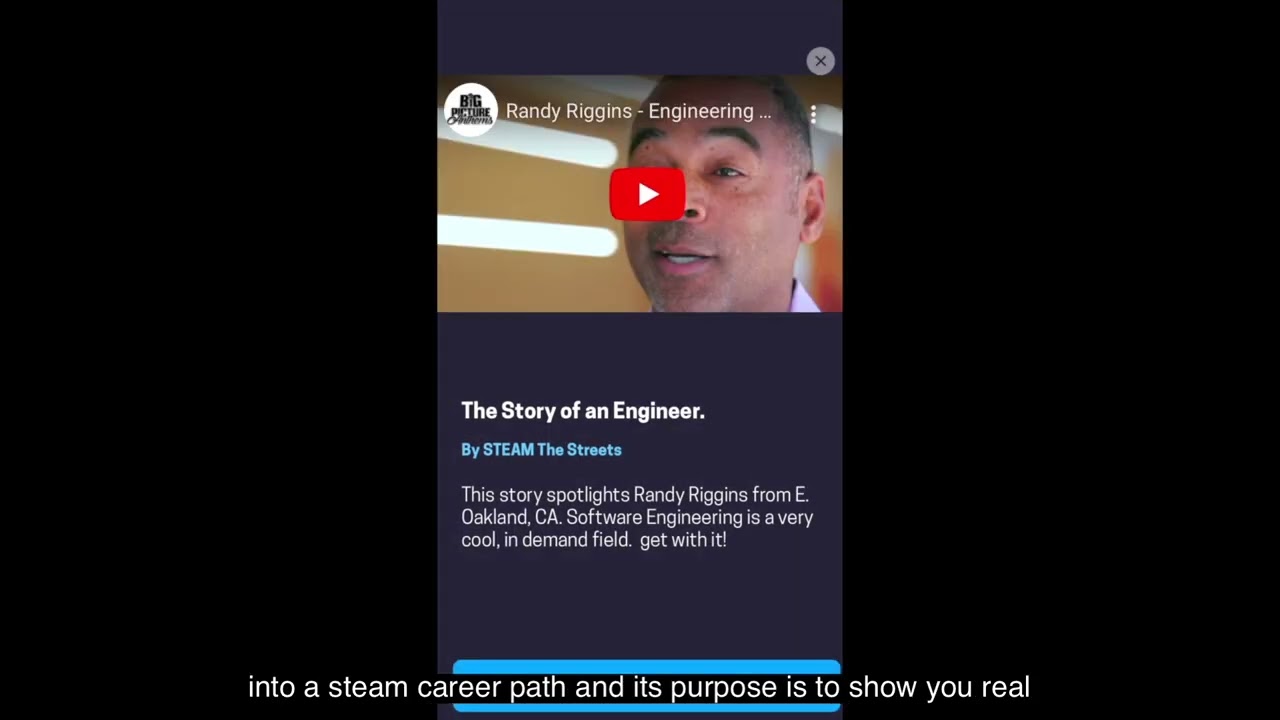 While Gilbarg and Diaz still consider the app to be in its early stages, they say the approach to design and execution is one that is proven based on their experience since starting STEAM the Streets over six years ago, and from many years before. , with Gilbarg co-founding the New Bedford-based youth empowerment organization 3rd Eye Unlimited in 1998, and Diaz working in youth outreach programs since he was a teenager.

“We’re trying to hit that ‘just right’ mark where they’re, oh, I can buy into this and this isn’t over my head, but it’s also not overwhelming where they’re, this doesn’t serve me,” Diaz said , also known as “DJ Anghelli” when she performed hip-hop. “It’s the music, it’s the flare, it’s the graphics, it’s the language used. It’s really just meeting young people where they are. We know there’s a style of energy that’s needed.”

According to a press release from STEAM the Streets, an estimated four million jobs in STEAM fields will remain unfilled by 2023. Although that ever-growing number is exponentially larger now than it was when Diaz and Gilbarg were growing up, the search has never been comparable to the opportunities available, both men said.

Diaz, who teaches at the tuition-free, all-girls Our Sisters’ School in New Bedford, says this has been especially true for historically underserved demographics, which is why there has been an emphasis on featuring professionals who are from BIPOC ( Black, Indigenous). , and people of color) backgrounds in the app.

Read what’s new in the business:Grey’s Grist Mill property may soon have a new owner. Here’s what we know so far.

“I was let down by the public school system, is what I tell people, and I think a lot of it was just because I didn’t have the right information that I needed to inspire me to make different decisions,” Diaz said, noting his Puerto Rican heritage. “And I’m just sick of the black and brown community being left out of things. If kids don’t see somebody who looks like they’re doing something, they’re not necessarily going to realize that they might be the ones doing it.”

“My grandfather … was head of the math department at Stanford University, and even with that, I felt totally disenfranchised from things like algebra in school,” Gilbarg said. “I never heard a teacher explain why we were learning it or tell us things like how you would use this math to create software, graphic design and all these things many of us would probably have found interesting. In our case, we know how to reaches young people in a way that creates that interest.

“We want them to see that you don’t have to wait until college to start discovering and pursuing what you want to be. You can start these things as early as middle school and high school.”

With a large part of STEAM the Street’s mission to diversify the overwhelmingly white, male-populated STEAM fields, the group found a friend in NOAA (National Oceanic and Atmospheric Administration) that has stated a similar goal of its own, as the two entities collaborate on developing a marine science career module for the app.

The first career highlight of the module, already in the works, will focus on the position of research marine ecologist through the experience of Dr. Tammy Silva of Fall River, who fills that role at the Stellwagen Bank National Marine Sanctuary in Scituate.

“We are currently in the pre-production phase of the episodes,” Gilbarg said. “We have one of our first video tapings in January where we’re going to talk to Tammy. You’ll hear her story about how she got into this and what she does, the salary area… She graduated from UMass Dartmouth and is from Fall River, so it’s a good, relatable link for people in our area.”

Gilbarg said it’s hopefully the first of many marine science careers to be highlighted. “I mean, the ocean is our backyard — we have SMST (UMass Dartmouth School for Marine Science and Technology), Woods Hole, Stellwagen Bank,” he said. “As we know, offshore wind is a big thing, so we hope to expand to that next.”

Diaz and Gilbarg said over the next year, there will be a focus on raising awareness of the app, as STEAM the Streets continues to set up meetings and partnerships with schools and other organizations both locally and outside, like last month when Gilbarg visited Aspire High School in Oakland, California, to introduce the app to students there.

“We have something planned with Voc-Tech coming up in January,” Diaz said.

Get the latest school news:Dartmouth superintendent search process begins; Kiely to lead through the school year

Beyond the yet-to-be-unveiled marine module, Gilbarg said future development plans for the app include incorporating mentorship into the app as an unlockable feature that can be earned. “The support part is really big because no matter how accessible something may seem, you need community,” he said, noting that much is due to the support of sponsors such as the Marion Institute, BayCoast Bank, the Carney Family Foundation and the McMillian-Stewart Foundation for STEAM the Streets achievements. “That’s really the bigger vision for this — to create a community.”

“When I look at us and where we are with this work it’s like, yo, who would have thought we’d be here doing what we’re doing at this level? I mean, we built an app! A couple of New Bedford kids who came up from a love of hip-hop, knew nothing about building apps, and still did it anyway,” Diaz said. “And look now — we’re working with a federal agency and talking about how we can put this thing in as many people’s hands as possible across the country.

“If we can do all this, just imagine what you can do.”