The dropship is one of the archetypal sci-fi vehicles. In sci-fi video games, it fills an important role in both combat and the story. Although they do not often serve as hero ships, they ferry the heroes or their reinforcements to and from the battlefield.

The dropship comes in various shapes and sizes and is capable of many missions, from transport to armor deployment and fire support, making its presence felt in almost every sci-fi environment imaginable. These sci-fi video games are the best at what they do and fit perfectly into their universe, enhancing gameplay and storytelling.

10/10 The Vertibird is a powerful symbol 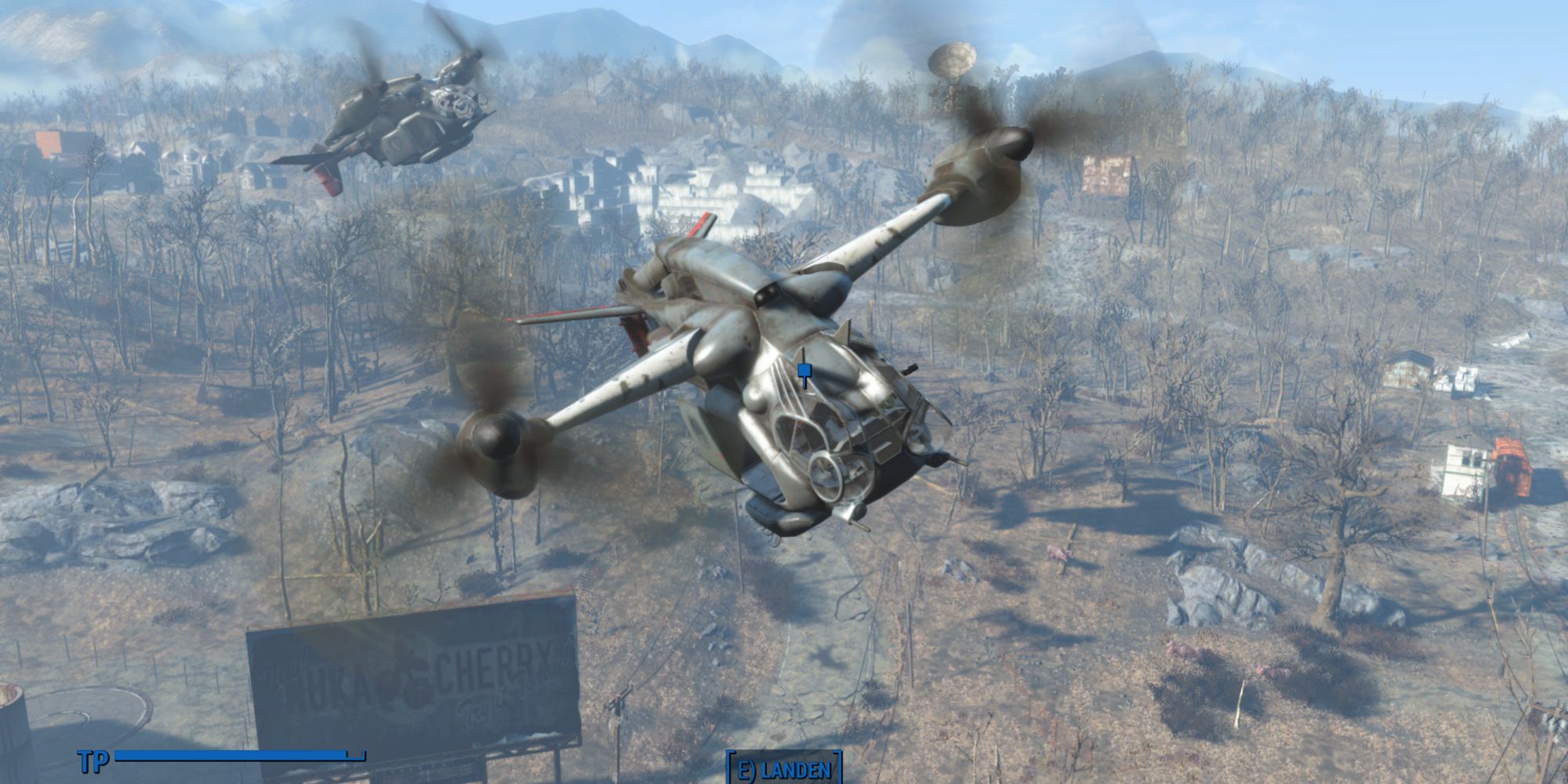 In the long-broken world of Fall out, vehicles are not widespread. Those still working are valuable assets to those who control them. After all, a working car can travel much faster and further than a Brahmin-drawn cart. For the few who have them, Vertibird is the most powerful tool at their disposal.

The Vertibird stands out because of its utility and how its use is symbolic of each faction. In the beloved classic PC games, they represent the untouchable power of the Enclave, while in Fallout 4, they represent the changes within the East Coast Brotherhood of Steel. They can bring down fire from above with cannons and miniguns, cover the troops they deploy, and fly motionless over the landmines and booby traps raiders leave along important roads or pass effortlessly over the scrap metal walls of a settlement.

Battlestar Galactica was rebooted in 2004 to critical acclaim, and while there are many elements of the show that haven’t aged well, the Raptor’s design remains as stunning as it was nearly 20 years ago. With its own FTL station, ECM suite, powerful scanning systems and a number of weapon hard points, the Raptor can perform various missions.

In the critically acclaimed strategy game Battlestar Galactica: Deadlock, the Raptor can use the ECM hardware to disable Cylon mines and munitions or boost the firewalls of a hacked Battlestar. It can also use its missiles against enemy capital ships or fighter squadrons and deploy squadrons of marines to board enemy warships.

8/10 The phantoms are incredibly tough and versatile

Halo 2 replaced the original game’s Spirit transport with a much sleeker new design: the Phantom. Far more armed and armored than the Spirit, the Phantom was faster and had a much better system for deploying its troops.

RELATED: The 10 Best Halo Weapons of All Time

It was now much more difficult for players to get easy kills on troops leaving the Phantom. In addition to the underlying plasma cannons and the door-mounted plasma cannons that provided covering fire, the troops inside had several means of egress using the side or rear doors or the keel-mounted gravity lifts.

In addition to being considered one of the best tabletop wargames and TTRPGs ever, Warhammer 40,000 also has a strong presence in video games. While they mainly focused on their famous space soldiers, the Adeptus Astartes, the common men and women of the Imperial Guard, or Astra Militarum, are often present and fight alongside the space soldiers.

When they get their turn in the spotlight, the Guard can be seen deploying mass waves of infantry, hundreds of artillery and tanks, and the skies swarm with their Valkyrie Assault Carriers. Armed to the teeth, the Valkyrie can provide air support and even engage in some dogfights. In addition, it deploys infantry or uses a specialized variant (Sky Talon) to deploy light armor.

Mass effect is considered one of the best sci-fi RPGs of all time for its story and characters and because of how the ship design reflects the world building. Of course Normandy and Destiny Ascension are probably the most famous examples, but the Geth Dropship deserves its place in the sun.

As the only (known) synthetic race in the galaxy, the Geth operate much differently from all other species, influencing their ship designs. The insectoid appearance of the Geth Dropship is as strange as its functions; it can transport troops and provide cover by projecting energy shields over them. Incredibly well-equipped and versatile, the Geth Dropship shows without words how alien the Geth are.

The XCOM the series is known for many things, but Skyranger is a particularly recognizable element. It is the key craft for deploying troops across the globe to fight the alien invasion; it is also the only craft.

In the 2012 reboot of the franchise, Enemy unknown, the Skyranger is capable of rapid travel across almost the entire globe without stopping to refuel. The sequel, XCOM 2, has a new Skyranger modified with alien technology. While it couldn’t travel as far as the original could, it had the stealth and speed to deploy right into cities or alien bases while avoiding alien defenses or aircraft. In a game where the player’s favorite soldiers can be killed at any moment, the presence of the Skyranger and its pilots is a welcome consolation.

Introduced in Rogue OneThe U-Wing is regarded by fans as one of the best additions to Star Wars ship design. Although fairly lightly armed and armored, the U-Wing makes up for this with incredible speed. It is so fast that it can provide support in both air combat and fleet combat, which is rare for a dropship.

Before the U-wing, the Rebels often used generic shuttles, heavy and slow gallopless cargo transports, or recovered clone weapons. While the latter was much better armed and armored, it lacked the speed the Alliance needed for its guerrilla warfare strategy. The U-wing had the speed to quickly deploy and retrieve troops and the firepower to provide air support and cover along the way.

3/10 Cheyenne has inspired many Sci-Fi Dropships

First seen in the classic film Aliens, Cheyenne is the granddaddy of all sci-fi dropships. The Cheyenne is armed with multiple cannons and rocket launchers, including its iconic but clumsy top-folding rocket tubes. With the firepower of a bomber, it was still fast enough to rapidly deploy troops from orbit to the surface of a planet.

When faced with the Xenomorph threat, the Cheyenne often stayed with the Colonial Marines they would deploy, using their weaponry to eliminate hordes of Xenomorphs or focus their heavy weapons on the giant queens. Its unique design and versatility have inspired other sci-fi dropships for decades.

Directly inspired by the Cheyenne, the UNSC Pelican is a much sleeker, more aerodynamic design. While the original variant featured only a chin-mounted autocannon for armament, later versions featured rear cannons and wing-mounted missile pods.

Armament aside, the Pelican was also incredibly fast and well armored, at least by the standards of the UNSC. Capable of transporting dozens of troops, multiple supply containers and even a Scorpion tank into battle from orbit, the Pelican serves as a vital battlefield tool for the UNSC and a critical role in facilitating the story of Hello game.

The Clone Gunship from Star Wars Battlefront II is armed to the teeth. Four missile launchers for air and surface targets, three laser cannons including a rear gunner, and four composite beam turrets allow the Clone Gunship to mow down any targets before dropping off or retrieving their troops.

Capable of carrying up to 30 clone troopers, along with speeders and light armor, and equipped with a medical station, the gunship can fulfill various roles, from fire support to deploying troops for everything from reconnaissance to frontline action. A specialized variant can also rapidly deploy the heavy armor support of the Republic AT-TE walker.