Popular writing app and markdown editor Ulysses has received a new project feature aimed at users who tend to work on larger projects, such as books, a thesis or a blog. 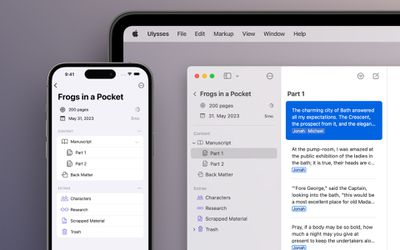 New to the app in version 29, the Projects feature shows only what’s relevant to the current project and hides everything else in the app’s sidebar to improve focus.

The writing target and deadline for the project are prominently displayed in the sidebar, where there are dedicated sections for content as well as additional silos for research material, while keywords for each project are managed separately.

The projects interface is designed to make content easily exportable, and each project can have separate settings, such as export style and file format.

In addition, Ulysses 29 overhauls the dashboard and review mode toolbars on Mac and the menus on iOS, and fixes a bug where italics would not appear in the editor. The entire process of moving groups and sheets has also been reworked, so that Ulysses’ drag-and-drop interactions finally work properly. 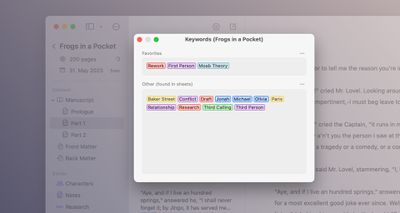 Students can use Ulysses at a discounted rate of $10.99 per six months. The discount is given from the app. Ulysses is also included in Setapp, the subscription-based service for Mac applications created by MacPaw.

iOS 16.2 for iPhone is expected to launch next week with these 12 new features

iOS 16.2 is expected to be released next week after nearly two months of beta testing. With last-minute additions like Apple Music Sing and Advanced Data Protection, the software update now includes over a dozen new features for iPhone. Below, we’ve detailed many of the new features that come with iOS 16.2, including Apple’s new whiteboard app Freeform, two new lock screen widgets,…

Two unreleased Mac models have been discovered in Steam’s November 2022 survey, which collects anonymous information from willing Steam users about specific details about their computers, including the computer’s model, CPU type, memory, and more. In the November 2022 survey, two unreleased Macs with the identifiers “Mac14.6” and “Mac15.4” were seen at the bottom of the list, along with the model…

Can’t get an iPhone 14 Pro? Here’s why you should wait for the iPhone 15 Ultra

Due to production issues at Apple’s supplier factories in China, the iPhone 14 Pro and iPhone 14 Pro Max are backordered and basically sold out in all stores. If you were planning to give or receive an iPhone 14 Pro model for the holidays and haven’t already gotten one, you’re basically out of luck because they’re gone until the end of December. Subscribe to MacRumors YouTube channel for more…

Google Chrome gets support for passkeys, making it easier to sign in to websites and more

Google Chrome has announced that it has added support for passwords, a new industry standard that hopes to replace passwords by making it easier and more secure to log into websites and apps. Passwords allow users to authenticate and log in to websites using iPhone or Android devices, replacing the need for a password. On newer versions of iOS and Android, users visit websites that…

Starting with iOS 16.2, iPadOS 16.2 and macOS 13.1, all of which are expected to be released next week, users have the option to enable a new advanced data protection feature that extends end-to-end encryption to many other areas of iCloud, including backups of messages, photos, notes, reminders, voice memos and more. To protect users, Apple does not allow Advanced Data Protection…

With the iOS 16.2 release candidate coming out today, Apple added the new Apple Music Sing feature that was announced earlier this week. We thought we’d check out the new karaoke feature to see how it works. Subscribe to MacRumors YouTube channel for more videos. Apple Music Sing is available on modern iPhones and iPads, as well as the latest Apple TV 4K. It is built into the Apple…