The Chinese brand Xiaomi will hold a new product launch conference at 19:00 on December 11. At this event, the company will officially unveil the Xiaomi 13 series as well as its new Android skin, MIUI 14. The new Xiaomi 13 series will be the first flagship mobile phones to come with the MIUI 14 system. While this new system brings several upgrades, some are just amazing and they stand out. Below are the three amazing features that the MIUI 14 system will bring

Xiaomi introduced the photon engine to speed up third-party apps. Any app you download from any source can be much better in speed with the new MIUI 14 system. The Photon engine optimizes deep into the Linux kernel and provides MIUI users with an unmatched smooth experience. An official poster revealing the MIUI 14 Photon Engine reveals that third-party apps can increase by 88% in fluidity. Furthermore, the feature will also reduce power consumption from apps by as much as 16%. It will be good to feel the changes that this new feature will bring. We can also easily compare the speed of apps on a Xiaomi phone with MIUI 14 and one without. 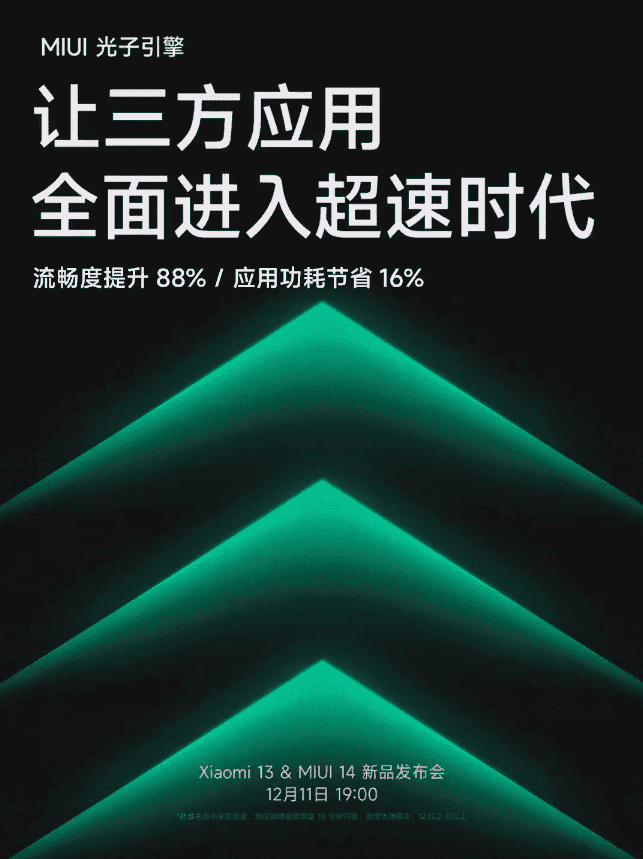 The head of MIUI development, Jia Fan claims that MIUI 14 will have four main features. This system comes with fewer pre-installed apps. It will also provide more practical functions as well as a new design. Also, the system will be more stable with a smooth experience. The Chinese company has also released the official logo for MIUI 14. This logo comes with the slogan “Forge new life”.

A very decent and perhaps the most attractive feature of the MIUI 14 system is the new “ultra-clean system”. Xiaomi considers this system to be “ultra clean” because it comes with the best minimum firmware. It also uses little memory and pre-installs the fewest apps. According to reports, users can delete all internal apps, and only eight (8). Only highly relevant apps such as phone calls, test messages, clocks and app store can remain on the phone. This can make the mobile phone very light and fluid. The ultra clean system starts by removing the system firmware. Over the past 12 years, MIUI has upgraded the Android system and the firmware has grown. This time it breaks the natural expansion of the system. The more the system takes in, the heavier it gets. What about users who don’t need any of the features? For this reason, MIUI decides to free the system and the weight is reduced by 23% compared to the previous version.

Gizchina News of the week

Freeing up the system also means reducing memory requirements. Users can strictly control the memory usage of system apps and services. This will also free up boot memory as much as possible. According to Lei Jun, Xiaomi’s CEO, users now have the right to choose which app stays on their devices. Apart from the eight required apps, all other pre-installed apps can be deleted.

Another very good feature of the MIUI 14 system is the support for replaceable large icons. The desktop icons you are most familiar with can be bigger and better. The new size makes the desktop layout more colorful. There are reports that MIUI 14 supports customizable new icons and widgets. The system will also bring large folders.

See also  Everything you need to know

Thus, users who always wanted fewer but larger icons on their desktop can now get them. Simply put, MIUI 14 gives users a lot of options. In addition, MIUI 14 also supports flower decorations. Here is the video to see what this feature looks like. Currently, some MIUI users already have this new system. The MIUI 14 early adopters program started at the end of November 28. This early user activity will end on December 28, a period of one month. Xiaomi community users can register to participate in the MIUI 14 early adopter plan during the event period. However, it is pertinent to note that the event is limited to one Xiaomi device per user. This includes, but is not limited to, mobile phones and tablets for registration. After successful registration, it cannot be replaced/cancelled. Be sure to confirm your device information when registering.

As for the shape of the event, Xiaomi officials will give users the option to unlock based on the data assessed by the user’s history. Users can unlock the event page during the event time to earn experience qualifications or other rewards.

According to a report by MyDrivers, MIUI 14 may not include ads. The company wants to make the system attractive to users. The source claims that MIUI 14 will focus on getting rid of bloatware and pre-installed apps. Xiaomi has already put a lot of work in this regard in MIUI 13. We have to cross our fingers and see what this new system will offer. However, things are looking good for MIUI 14 at the moment.